Opened in 1924 to service the growing population, plus the 30 Group Settlements in the district, railway was the main form of transport before better roads were built. All sorts of goods were handled including timber, livestock, dairy produce and passengers. It took some 12/14 hours to travel from Margaret River to Perth and 4 hours from Margaret River to Busselton. 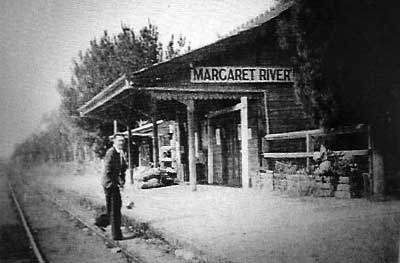 Miss Agnes Higgins operated a refreshment room at the station for many years. The station area included a ticket office, goods shed, heavy duty crane, overnight quarters for train drivers and stock yards for holding farm animals. In the 1960's there were still pig and calf sales held on the station grounds operated by stock agents in Elders, Goldsborough Mort, Wesfarmers and Dalgety. As better roads were built and more efficient vehicles, both freight and passenger, the future of the railway was becoming inefficient and a necessity to close it which occurred in 1957.

Passenger buses and road freight continued after the last trains left and in the 1980's the station building was relocated to Busselton to be used as a tourist railway venture. The rest of the buildings in the goods shed were used by various groups including Bob Castle selling second hand items. Now the Margaret River Environment Centre and Organic gardens are operating here as well as the Margaret River State Emergency Services Headquarters next door. There are plans to rebuild a replica of the station building in the future.