At some of the locations on this page you will find the Geocaching symbol which means that there is a Geocache hidden nearby.

Geocaching is a fun treasure hunting game for the whole family. Participants navigate to a specific set of GPS coordinates using a smartphone or a GPS device and then attempt to find a treasure hidden at that location. Finds can be logged online. Register a free account and start searching! 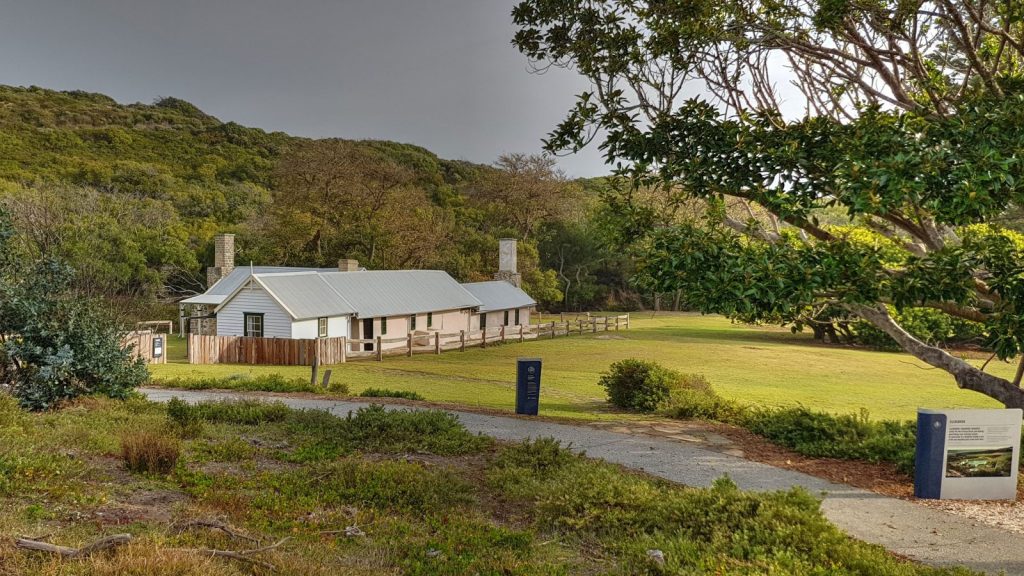 Ellensbrook is a small cluster of wattle and daub buildings built for Alfred and Ellen Bussell. Construction began in 1855 when the Bussells had left their home in the Vasse to settle near the Margaret River on a 10 acre land grant given to Alfred. They chose a site, close to the sea, which had a brook (Ellen Brook) running through the property. This is where the new house was located. Driftwood was used as a ridge beam and rough bush poles and paperbark were used to create a framework for the house which was later sealed with a special type of plaster. With the help of the local Aboriginals they created a plaster by burning limestone from nearby dunes. Ellen established a dairy and a garden at their home, and there were also crops of potatoes and other vegetables, oats, barley and wheat. As the years passed, Ellensbrook grew as the family grew. The additions to the house took on an L-shape, following the contours of the land.

In the early years at Ellensbrook, until they were able to grow their own crops successfully, life was not easy for the Bussells. They were isolated and supplies were short and expensive. Ellen was often left alone with the children, especially as Alfred kept adding to his property and had to erect many miles of post and rail fence, as well as bridges. By 1858, the Bussells had outgrown Ellensbrook and had to look for other land upon which to build a new home. This new home was known as Wallcliffe.

The Noongar know the place as Mokidup, a place which had been a traditional summer camping spot for thousands of years. Just 500 metres away from the homestead is the Mika Darabi (Meekadarribee) which means ‘place where the moon rests.’ The Dreaming story goes that ‘the waterfall flowed down the hillside, past the cave, where the moon came ‘when she vanished from the sky to bathe and recover her gleaming silver in the hidden store within the cavern.’ The cave is home to Aboriginal spirits of Mitanne and Nobel, lovers who are reunited and the waterfall ‘echoes their laughter.’

After Alfred and his family moved from Ellensbrook to Wallcliffe the property was taken over by his sisters Fanny and Edith. In 1898 Edith established an Aboriginal Mission on the property, the Ellensbrook Farm Home for Aboriginal Children.’’ Noongar people were allowed to stay and work on the property in return for food and shelter. The mission operated until 1917. To the Noongar Ellensbrook stands as a ghost house, representing the pain suffered by their people. Ellensbrook continued to be owned and mostly occupied by direct descendents of the Bussell family until 1956, including Frances (Fanny) Brockman, Edith Bussell, and Lennox and Frances Terry.

In 1979 the homestead was donated to the National Trust and since then major restoration works have taken place.

In 1992 Ellensbrook Farmhouse, Dam and Waterfall were added onto the Heritage Council of Western Australia’s Register of Heritage Places.

As at 2012 the place is a National Trust managed property, open to the public.

For more information about this place and admission into the homestead, visit the National Trust website 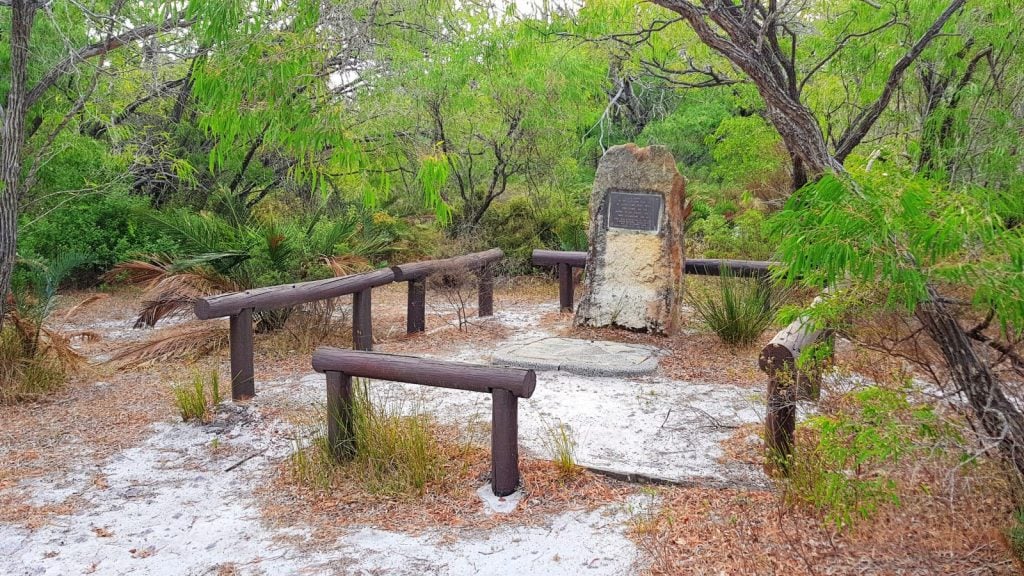 In addition to the house, the Ellensbrook property also holds a gravesite in Ellen’s peppermint grove where three of the Bussell’s sons were buried – Jasper, Christopher and Hugh. William Cheesewell, who was a servant of the Bussells is also buried there. There are remains of a post and rail fence which was part of the Ellensbrook original fencing south of the Cowaramup Bay turnoff. 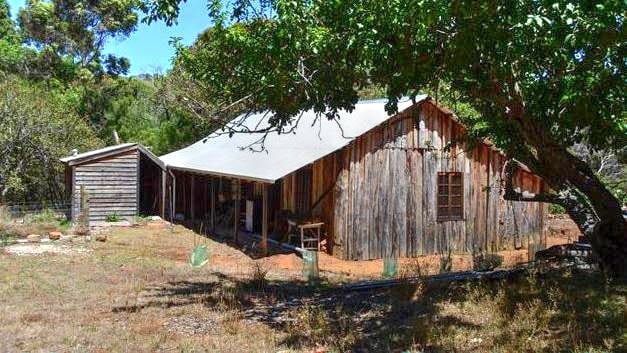 In 1887 Stewart Keenan took up a 200 acre block on the north bank of Ellensbrook facing Spring Road [now Caves Rd] and in 1888, together with his son-inlaw, James Armstrong, began splitting timber for the building of a home.

The original structure consisted of a large dining/living area at the south end, another good sized room and an adjoining sitting room. A gable roof covered this part of the building. At the rear of these rooms, under a skillion roof, were two small bedrooms and a kitchen with a stone floor. A door opened from the kitchen to a cobble stoned area at the back of the house and washing facilities were arranged on a rough wooden slab running along the outside of the kitchen wall.

The family moved into their new home in the winter of 1889, and commenced dairy farming operations and a large, associated, cattle run consisting of 2000 acres in Rosa Brook area, and 2000 acres north of Margaret River, up to Bramley.

About the turn of the century, Grace and Jack Catherall (niece and nephew to Keenan) lived at Glenbourne and added two more rooms higher up the hill at the north end of the front veranda. Although the Catheralls stayed only a short time this part of Glenbourne became known as ‘Jack’s House’ (demolished in the 1960s).

The Keenan’s two daughters later cut a track between Glenbourne and the railway (north of the Margaret River) so that produce could be transported by horse and cart instead of by horseback. This track is now called Carters Road.

Of Stewart and Isabella Keenan’s nine children, Robert John and Mary Ellen (a.k.a. Minnie) were the only ones to remain at Glenbourne. They inherited the property after Isabella's death and Minnie stayed on at the property until 1958, when it was sold due to her failing health.

The Margaret River Conservation Farming Club purchased the property, in March 1977. One of the conditions of sale was that Albert be allowed to live in Glenbourne Homestead for as long as he wished. The Margaret River Conservation Farming Club, one of several established in the South-west during the 1970s, acquired Glenbourne with the object of combining simple farming with recreation and nature conservation. The Club built a large Clubhouse, which extends along a ridge above Glenbourne Homestead, and did not used the old farmhouse, aside from the occasional storage of timber.

By the early 1990s, Glenbourne Homestead had become derelict and some members of the Club, who feared it could be dangerous to children, decided to commence demolition. Other members opposed this action, but by the time the demolition was halted considerable damage had been done to the fabric. When inspected in September 1997, the house remained fenced-off, unused, and in a semi-collapsed condition.

Glenbourne was entered in the Sate Register of Heritage Places in 1998.

Please note that Glenbourne Homestead is on private property and it can't be accessed by the public without permission. For more information contact the Margaret River & Districts Historical Society.

The Cowaramup district was opened up for closer settlement with the establishment of the Group Settlement Scheme in the early 1920s. Groups 12 and 13, which were in the immediate vicinity of the present town, were both established in April 1922. With the commencement of a railway service in 1924 Cowaramup siding became a busy local centre. The first town site (west of the railway siding) was surveyed in 1925 and the present site was gazetted in 1930.

In October 1929, the Cowaramup Progress Association and Agricultural Society called for tenders for a new 60ft x 30ft hall and they subsequently employed the services of Mr Falkingham of Busselton, who built the hall for £102/5/6. The timber was supplied by Phil Ryan from Swan Saw millers, of Busselton. Millars supplied all the materials at a cost of £200.

The hall was eventually paid off by the shire in 1945, vested in the shire, and subsequently run by the Hall and Reserves Committee.

An extension was built to the north side of the hall in 1960. A front porch was added in 1985 (no longer extant) and further renovations were undertaken in 2000. 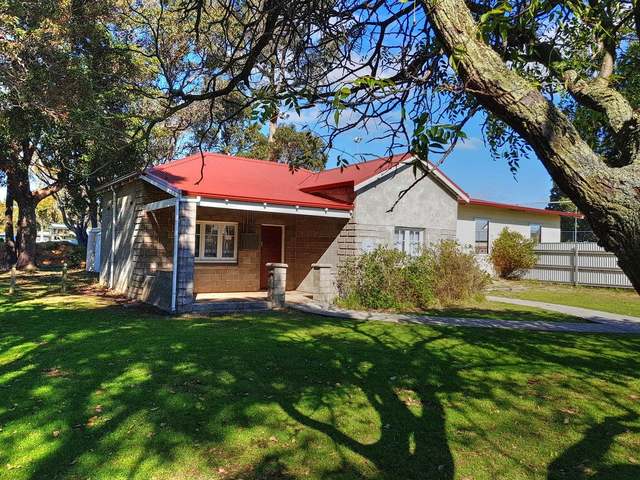 The Cowaramup district was opened up for closer settlement with the establishment of the Group Settlement Scheme in the early 1920s. With the commencement of a railway service in 1924 Cowaramup siding became a busy local centre. The first town site (west of the railway siding) was surveyed in 1925 and the present site was gazetted in 1930.

The Country Women’s Association began in Western Australia in 1924 as a non-party political, non-sectarian and not for profit organisation with the first branch being at Nungarin. The aim of the Association then, and still, is to improve the wellbeing of all people, especially those in country areas by promoting courtesy, cooperation, community effort, ethical standards and the wise use of resources. The CWA was formed to meet the needs of the time – to help women in isolated rural communities and to provide a voice to Government to seek solutions to the difficulties facing families in such areas. The Cowaramup CWA Hall was built in 1941 by local builders and brothers Arthur & Leslie Mann. The hall was officially opened on 26 April 1941.

As at 2012 the place is used as a meeting room by the Cowaramup Tennis Club. 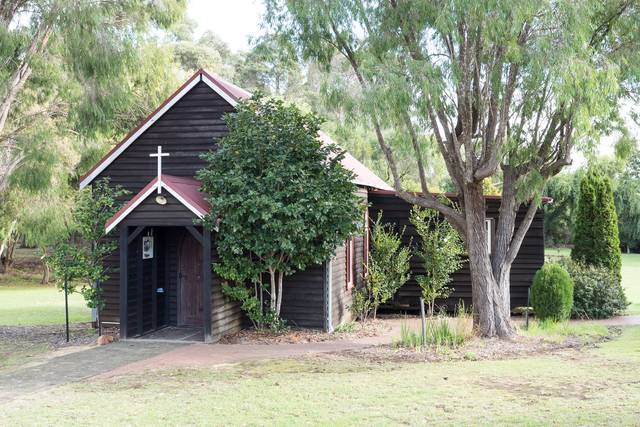 Erected in 1929, the St. Mary's Anglican Church in Cowaramup is a good example of a group settlement church still in use. 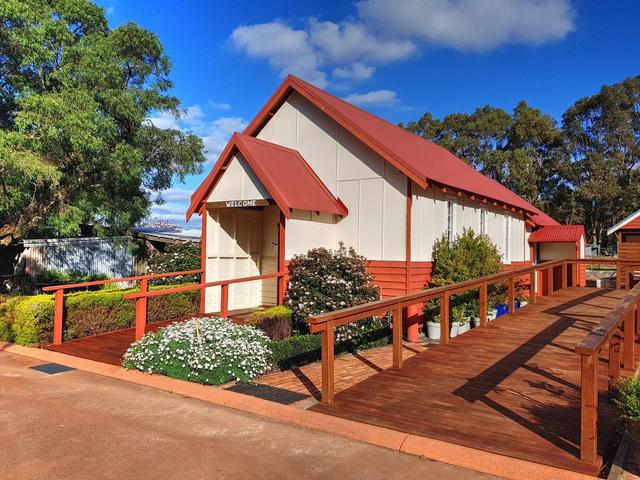 Erected in Cowaramup around 1928, the church was recently restored and relocated to the Taunton Farm Holiday Park.
Original location: 65 Bussell Highway Cowaramup 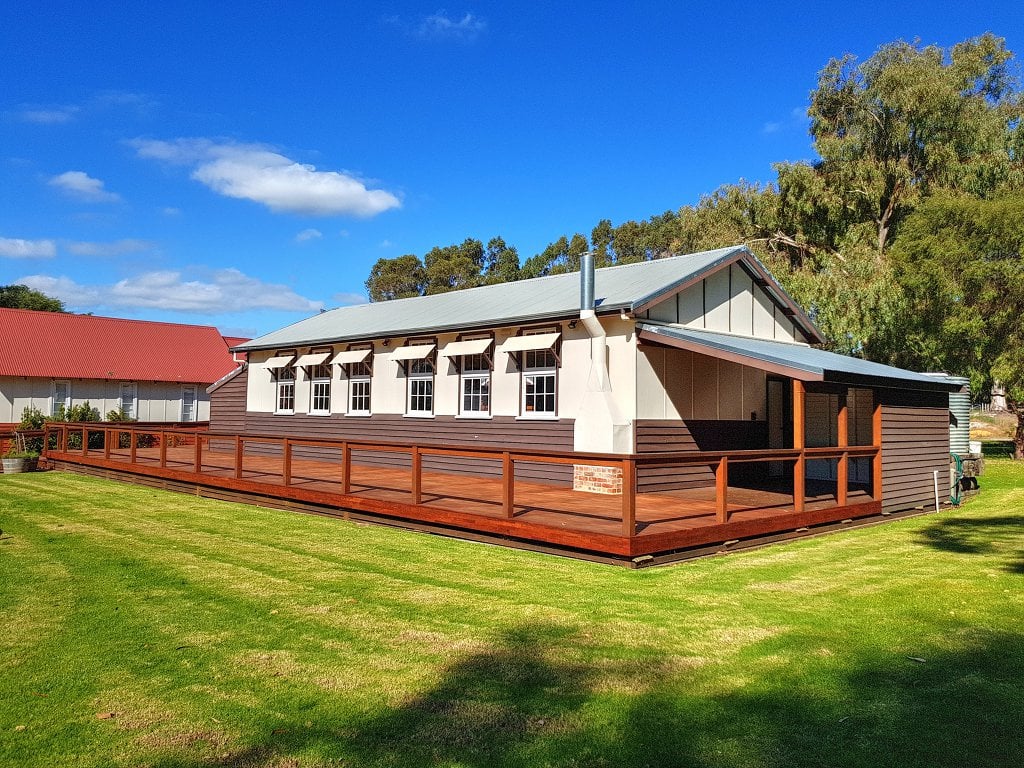 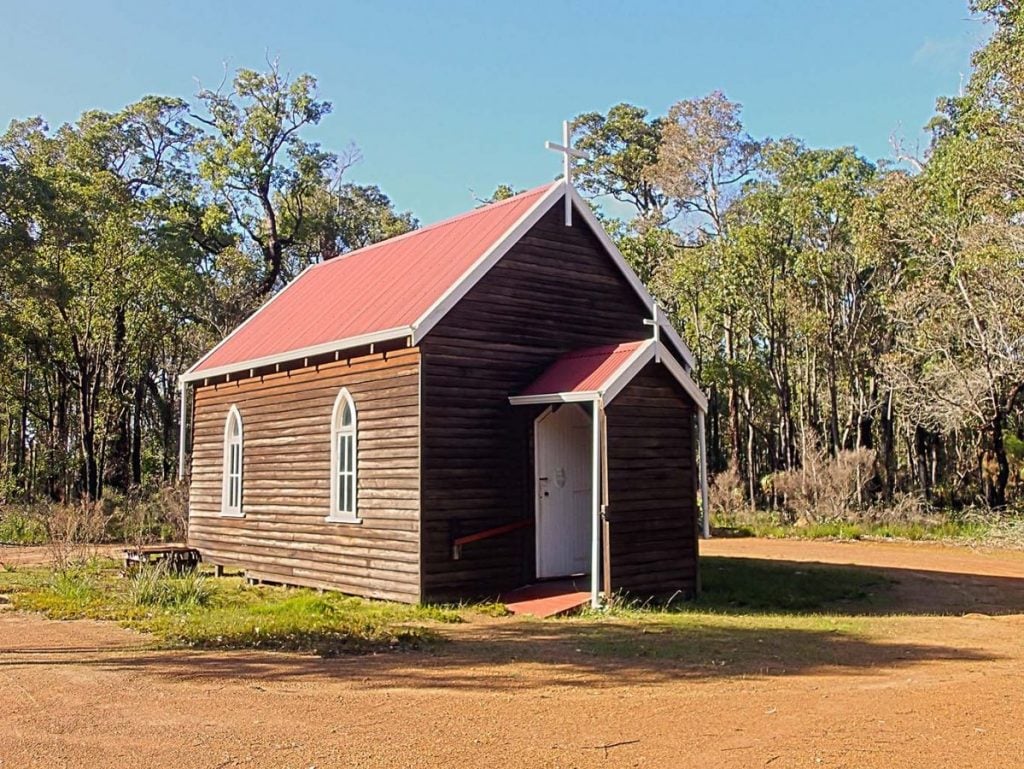 St John’s Anglican Church in Osmington was built by “Cotter” Williams. Williams wife although not an Anglican herself, helped organise fundraising events for the erection of the church building, although it was mainly through the generosity of Mrs Rivington in England. The church was opened on 27th December 1933 and dedicated by Bishop Wilson on 2nd February 1934.

The church was adjacent to the school, which has now been removed, and so the church building is the only tangible proof of the existence of the tiny hamlet of Osmington. A plaque to group settlement has been set outside the church and a list of present residents is inside. The church remains open at all time and has remained intact. 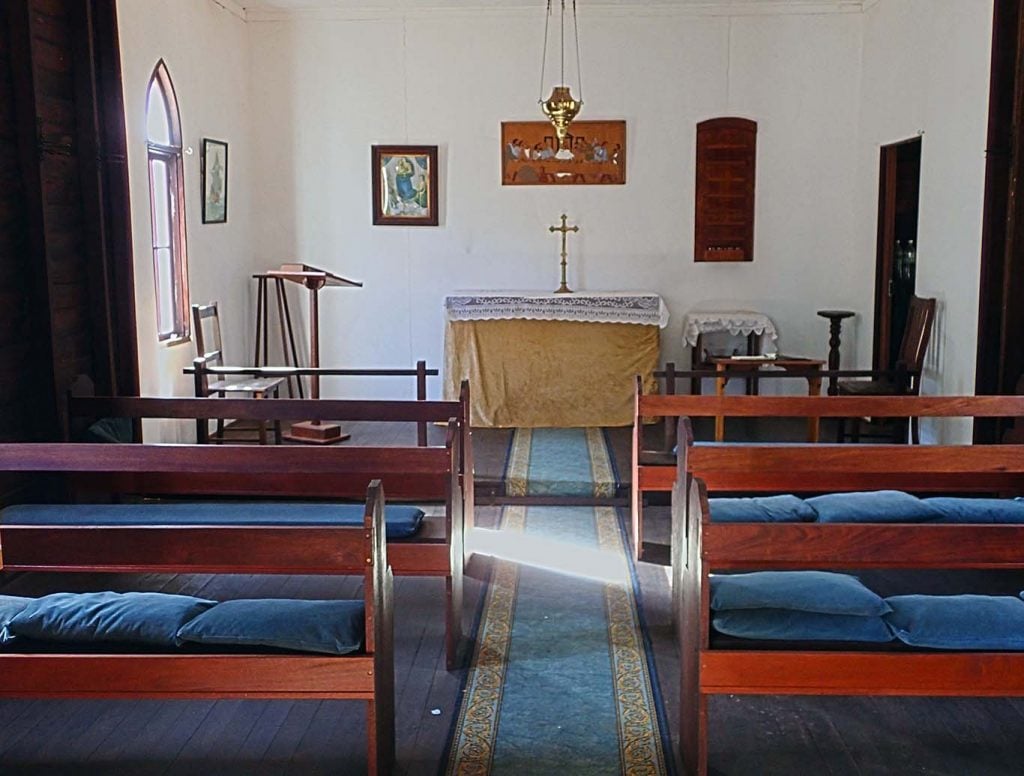 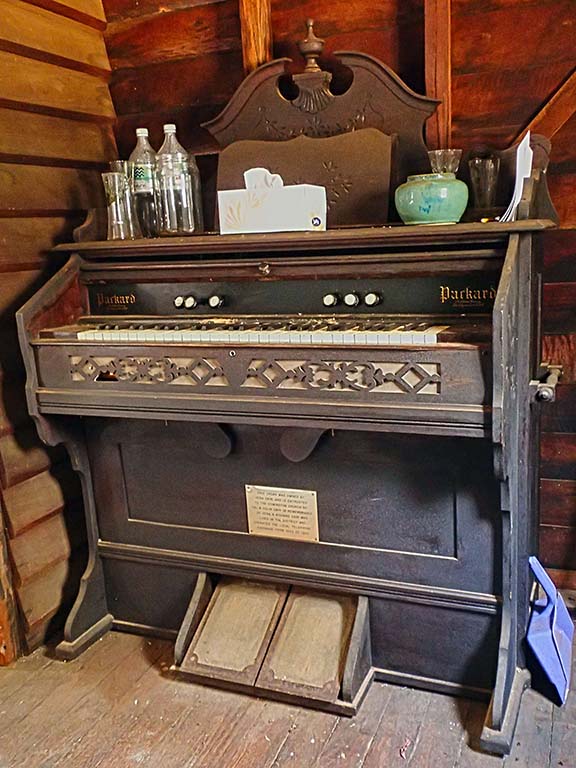