Various explorers who had scraped along the coast of Western Australia had had some interaction with the aboriginal tribes. Their observations – anthropology being an unknown science at the time – were in the main dismissive or patronizing, although Matthew Flinders made precise records of aboriginal implements, modes of burial and rock paintings. He is also reported to have arranged a military display for the aboriginal people!

Nevertheless, when the small party of settlers disembarked from the “Emily Taylor” on May 2nd 1830, having been persuaded to try their luck in Augusta after sailing from England to the Swan River Colony, the aboriginal people of the Wardandi tribe would have been totally unaware of the disruption that was to occur to their tribal life and land.

The names of Molloy, Bussell, Turner, Dawson, Chapman, Heppingstone, Staples and others entered the south-West lexicon, but the Augusta settlement did not thrive and some of the settlers ranged out and about seeking more fertile soil and more benign prospects further north.

The early settlers dispersed from Augusta to Vasse and Wonnerup and other areas and suffered the universal privations involved in imposing white men’s rules on to a land and a people who had not the slightest idea of what this meant. In the case of the land, crops and herds were difficult to establish, often through lack of trace elements in the soil, a factor unrecognized by the sciences of the time. Lack of water in summer, too much in winter, made life difficult. Irregular supplies made for some lean times. In the case of the native tribes of the area, puzzlement, helpfulness, suspicion, tentative friendship and outright aggression were all experienced by the white settlers, who responded in many – sometimes brutal – ways but always without any real appreciation of the culture they were supplanting.

As with many small communities, there were personal tensions, too, among the settlers and many took a generation or so to smooth out. But there was a universal determination to succeed in this harsh new world.

The Augusta settlement, and subsequently other ports, were visited in these early days by American whaling ships as they worked along the shore. To the isolated settler, they were exotic and exciting, providing barter opportunities - molasses, tobacco, rum, tin ware, etc. for potatoes, meat, vegetables, wine and wood. Some of the whalers married settlers' daughters who often sailed with their husbands.

The initial settlement at Augusta diminished as settlers sought more productive areas. Captain Molloy and his tragically short-lived wife Georgiana were among the last to move north to the Vasse, but only after Georgiana had revealed herself as an amateur botanist of rare distinction by sending copious drawings, samples and seeds of the native flora of Western Australia back to England where books and calendars were published using her work and plants grown using the seeds she sent, but her significant contribution was unacknowledged at the time. Finally in 1849 James Turner was the last of the original settlers to reluctantly leave and move to Perth. Augusta languished until a new wave of settlers arrived in the 1860s.

The Timber industry eventually flourished, at first under enormous difficulties of transportation, then more smoothly from 1875 onwards as M.C.Davies of Karridale fame lent his energies to the industry. Davies built many miles of railway line to transport his timber, as well as mills, ports and jetties and the necessary workers and others then attracted to the area saw the population grow.

The erection of the Leeuwin Lighthouse, built by another M.C.Davies company and opened in 1896, followed by the Cape Naturaliste Lighthouse in 1904, made the south-west coast a much safer place for shipping.

The most famous wreck off the south-west coast was probably that of the “Georgette” in 1876 off Redgate beach. The “Georgette” had foundered further north and lifeboats had been lowered; one overturned and seven lives were lost, but James and William Dempster and seamen John Dewar and James Noonan managed to bring the other to shore at Injidup through treacherous seas. They were subsequently awarded a certificate from the Royal Humane Society. In the meantime, the “Georgette” had drifted south to Redgate where the remaining passengers and crew were brought to shore through dangerous seas by 16-year-old Grace Bussell and servant Sam Isaacs who rode their horses into the surf and saved the lives of all on board. Fifty people from the wreck were taken to the Bussell home, “Wallcliffe House” and accommodated until they could be moved.

Margaret River townsite was officially gazetted on February 7th, 1913. The Margaret River itself was named in the late 1830s by John Garrett Bussell, the eldest of the pioneering Bussell brothers. The river, and the Whicher Range from which it rises, was named after Margaret Whicher, a step-second-cousin of John Bussell. (The Historical Society has recently completed exhausive investigation into why John Bussell named the river after this apparently-distant young relative, and the story has been included in "Margaret River Stories" which was released in 2013 to coincide with the town's centenary).

The Bussell family looms large in the history of the area. Probably its most notable son was Alfred Pickmore Bussell who had emigrated with his three brothers to Augusta in 1830 at the age of 14. In 1850 he married Ellen Heppingstone, born in Augusta and daughter of Robert and Ann Heppingstone who had come to Augusta as part of the Molloy contingent. At one time he commanded land that reached from Augusta to the Vasse and his properties included Ellensbrook, Wallcliffe, Burnside, Fairy Ring and Woodyche. Direct descendants of Alfred and Ellen still live in Margaret River, as do descendants of several of the other pioneering families.

The First World War saw the enlistment of many young men from the Shire, and the death of several. As with thousands of country towns all over Australia, their loss was a poignant reminder that even the most remote, peaceful and picturesque of towns is not protected from such brutality.

The 1920s brought Group Settlement to the Shire, and some 30 “groups” were established from Cowaramup to Kudardup and out to Rosa Brook during the period of Group Settlement from 1920 to 1930. This did a great deal to swell the development of the Shire – 30 groups accommodated some 600 families.

When the 1930s arrived so did the Great Depression, which was the final straw for many of the struggling “Groupies”. But the dairying industry had been established and would flourish in time.

From the 1920s there had been occasional strange and unusual visitors to the Shire, or rather the surf beaches of the Shire (See Surfing). These young men carried long curving surfboards and stayed on the beaches or in their rickety cars to take advantage of whatever waves might be on offer. These visits increased in the 1970s and some of these occasional visitors moved to Margaret River or nearby, buying properties and living a relaxed lifestyle rather at odds with the farming ethic. The surfing culture still pervades the area and it is said with some truth that when the surf’s up, tradesmen are unavailable!

Cowaramup village evolved through several Group Settlements in the area and by the time the influx of settlers ceased in 1926, it was a thriving little community with a Post Office, several shops and a farrier just out of town.

With the commencement of a railway freight and passenger service in 1924, Cowaramup siding became a busy centre. The railway went through to Margaret River the same year, and subsequently on to Karridale and Flinders Bay. The last train travelled this track in 1957 and its route has become the “Rails to Trails” walking track. Many bemoan the passing of the railway.

In August 1923 Dr Rigby was appointed as the District Medical officer, running his practice from a room at the front of the old hall and boarding with the Manns, a few miles south of Margaret River township, until the hospital was built in 1924, when he in turn built his home and surgery next door. A lovely story is attached to the building of the Margaret Cecil Rest Home, built at the rear of the hospital. Moved by the plight of pregnant women in remote areas with very unreliable means of getting to hospital for their confinements, the visiting Lady Cecil and her daughter Margaret returned to England and launched a campaign targeting the “Margarets of Great Britain” and encouraging them all to donate a shilling towards the projected building. This was achieved and the building was opened in 1929 with the added luxuries of gramophone, records, books and a monogrammed dinner service!

There are many delightful stories about the retail and service shops that came and went in all the townships of the Shire. Mrs. Whitewood’s Tea Rooms (on Bussell Highway, at the southern end of what is now the Coles complex) is host to stories of a morning snack delivered regularly to bank employees across the road, “rissoles only” and a dog that definitely preferred the tea rooms to his own home at the Doctor’s up the hill.

The opening of the Margaret River Hotel in 1936 by Bernard McKeown gave the town a modern building to attract visitors and was probably the beginning of the tourism industry that booms today. In 1936 a room at the Hotel (hot and cold running water in all rooms) cost twelve shillings – or four guineas a week, which included daily a morning paper, early morning tea and toast and three very comprehensive meals!

The area did not prosper mightily through the depression and World War II, where again the young men of the district joined up and some families again were forced to suffer the loss of son or husband. Post WW2 came a trickle of migrants, bringing the then-strange names that are now just a part of the fabric of life in the Shire. Languishing through the sixties and seventies, the area’s tourism potential, with scenic areas combining beach, surf, forest and the emerging wine (See Wine) industry slowly began the path to the vibrant and exciting area that now makes up the Shire of Augusta-Margaret River. 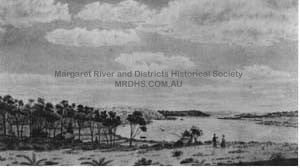 Painting by Thomas Turner of Hardy Inlet, Augusta, in 1837 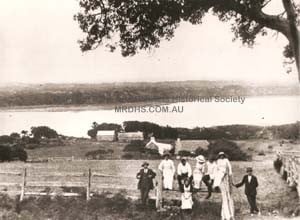 The Ellis farm at Augusta in the early 1900s 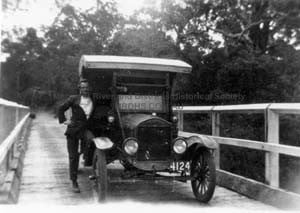 Ned Higgins on the old Alexandra Bridge in the 1920s 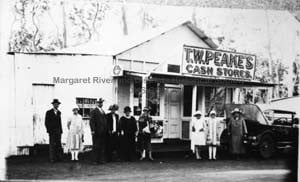 T.W.Peake's Cash Store in Cowaramup in the 1920s 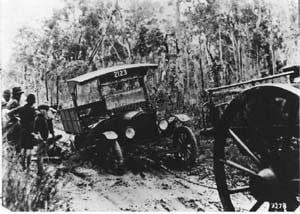 The 1920s. Bogged Group truck being pulled out by horse and cart. Roads were impassable in the winter 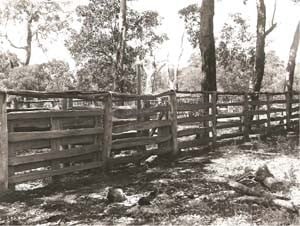 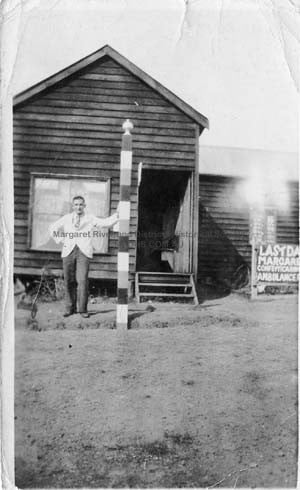 Mr Fee the Margaret River barber in the 1930s 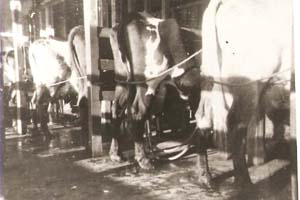 Cows being milked by machine in Kudardup in the 1950s 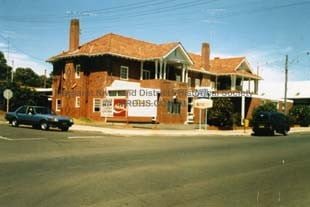 This short video by MRG TV about Karridale and Hamelin Bay contains a lot of interesting historical information of the Margaret River area.

Karridale is a beautiful small township in south-western Western Australia, located between Margaret River and Augusta, with stunning beaches and towering Karri forests. Rich in history, the area was once the centre of the state's Timber industry exporting Karri and Jarrah from Hamelin Bay. Now the area is a mecca for tourists as they flock to see the limestone caves and the stingrays.