The area around Margaret River and Witchcliffe has one of the most extensive cave systems in the region. 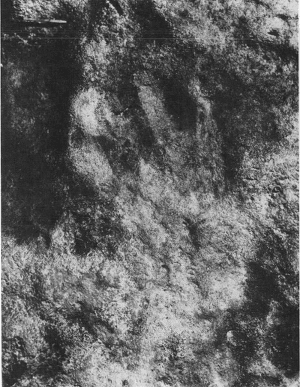 In November 1982 two Aboriginal painted hand stencils were discovered at Old Kudardup cave. The stencils are approximately 70 cm apart and situated about 2 metre above the present surface of the slope. The wall of the stencils is undercut and extensively weathered, and neither of the stencils is very distinct. Both are of a human left hand, possibly of the same individual, and each is made in reddish-brown ochreous paint. The presence of the chert suggests that the cave was known and visited by Aborigines some time prior to the Middle Holocene. The Old Kudardup hand stencils are the first known examples of painted rock art in a south-western Australian limestone cave, and are an important find as they occur in an area previously noted for its conspicuous lack of Aboriginal art sites. Source: First Record of Painted Aboriginal Rock Art in a South-Western Australian Limestone Cave.

Old Kudardup adds to the half dozen caves in the Leeuwin-Naturaliste region known to contain archaeological material, the most noted being the even older deposit found at Devil's Lair. The W.A. Museum has performed excavations in the Devil's Lair cave over a period of years. The results of this dig have been extremely interesting, indicating the presence of aborigines in the south-west for a greater time than previously supposed. Several different techniques of dating have been used at Devil's Lair to show that human occupation began at around 48,000 years ago.

The first recorded discovery by European settlers of a cave in the Margaret River area, was in 1848 and was presumably the Old Kudardup Cave. In the 1880’s, following the clearing of forests by the M.C. Davies Timber Co, a series of caves were discovered.

The Bussell family who were early pioneers of the area, were also responsible for the discovery of many caves. For instance the Brides cave was named in honour of Grace Bussell’s daughter.

In the early 1900’s a Caves Board was established by J.W.Hackett to manage and protect 14 caves for the intended tourist possibilities. The first caves to be opened to the general public was the Yallingup Cave (later renamed Ngilgi Cave to acknowledge the Australian Aboriginal mythology) and Lake Cave. In 1905 Mammoth Cave was officially opened as a tourist cave although Tim Connelly conducted unofficial tours through the cave prior to 1904. Golgotha Cave is also a good example of one of the caves that was developed as a tourist cave and its impressive wooden gate is a result of that development. Many of the old staircases rotted and were removed from the cave which is not open to the general public anymore and requires a special caving permit.

With great success the Caves board began an extensive advertising campaign to attract both local and international tourists to Western Australia’s south-west region.

By the 1950’s there were only five caves still open to the general public. However, around the same time the Jewel Cave was discovered, which reignited interest in caving and tourism. Sir David Brand officially opened the Jewel Cave to the public in 1959.

Today only Giants Cave, Calgardup Cave, Ngilgi Cave, Mammoth Cave, Lake Cave and Jewel cave are open for the public. Access to most of the other caves requires a special caving permit. Visiting is possible as a member of a caving club such as Cavers Leeuwin Incorporated. CLInc is a not-for-profit club that is based around caving in the Margaret River area. For more information visit the CLInc website.