Sam Isaacs Snr, was an American whaler who arrived in the Busselton area around the mid 1830s. After a liaison with an Aboriginal woman a son was born in 1845. The mother died in childbirth and the baby, Sam, was passed to Anne Dawson who had herself given birth to a son, Elijah, on 30 August of that year. Anne suckled both boys, who grew up together on the Dawsons’ property Westbrook.

Sam became a well-mannered youngster who spoke English in the formal way of the settlers. He also became a skilled bushman, probably spending time with his mother’s coastal people, the Wardandi.

He worked for the settlers from an early age and was reputed to have been droving pigs to the Vasse from Augusta for Captain Molloy when he called at Ellensbrook, the Bussell property, after losing the animals in the bush. This was around 1860. He stayed with the Bussells, working on the new homestead at Wallcliffe and then working as a stockman on the property. On 28 January 1897 he married an Afro-American woman, Lucy Major, a ship’s cook who had arrived in Australia in the 1860s and was employed at Wallcliffe. They had seven children, Charlie, Jack, Jim, Samuel, Frederick, Mona and Harry. At some stage Sam took up Location 243 of 100 acres between Wallcliffe and the ford across the Margaret River, and built a house there called Fernbrook. 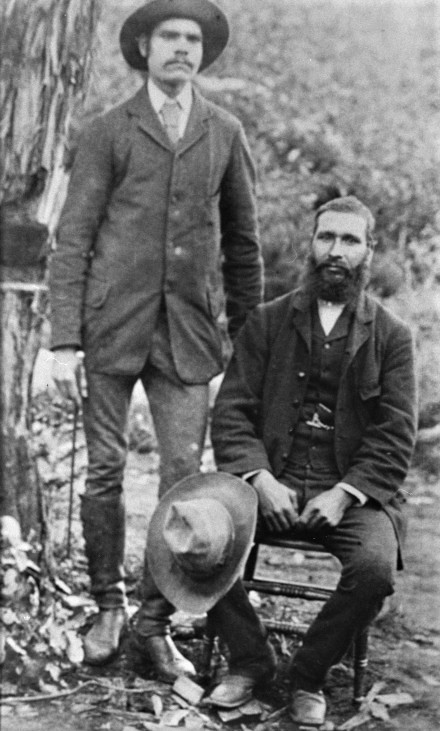 Sam Isaacs, on the right, with his son Fred. Sam’s tribal name was Yebble.

Sam Isaacs is most famous for being involved in the rescue of passengers and crew from the Georgette on 1 December 1876. Many columns of flowery prose were written in newspapers due to Sam's companion in the rescue, Grace, the 16 year-old daughter of Alfred Bussell. However, a more level-headed account came from Jim Kinsella. He recalled that Sam Isaacs was a personal friend of his grandfather Edward Kinsella.

Here is the story of the rescue of the shipwrecked people on the Georgette as recounted by Sam Isaacs to my grandfather: “Sam was cattle hunting on the hills and he saw the ship in difficulties. He rode back to Mr Bussell (at Wallcliffe House) and told him he thought it was too close in to be safe and there must be something wrong. Mr Bussell told him to take some ropes and gear and ride straight back. If he needed further help he was to come back.”

"When he set off, Grace Bussell, a girl of 16, begged to go. Her father said 'No' - young ladies of those days were not expected to do those sorts of things. Eventually she got her own way and did go with Sam.

"She went into the water only once. She rode her horse into the water and Sam had to tell her to be careful; that if she rode her horse in the way she was going, she would kill people or trample them under and drown them. He told her to turn her horse around and swim back. There was a woman and a child who grabbed the horse's tail and the horse towed them ashore. But Sam went in and out several times. By the time he got back with Grace, one man had got ashore and he'd got a rope lifeline from the ships mast and fastened it to the shore and soon there were three or four men ashore. It was a great feat for a girl of 16 but she was later given credit for almost the entire rescue."

Sam was awarded a bronze medal by the Royal Humane Society for bravery and selfless courage in the Georgette rescue. The colonial government later granted him full title to Location 243.

Some years later Sam worked at H.J. Yelverton's Quindalup Timber Mill and nearly lost one of his thumbs in an accident on the shingle bench. Fortunately the resident doctor was able to sew it back on. Lucy died after the stillbirth of their eighth child and she was buried near the mill alongside her mother. In his later years Sam worked for many local farmers, making hay, ploughing fields, working stock and driving a bullock team for Edie Bussell at Ellensbrook and Fairy Ring. He continued to work his own farm, cutting oats by hand with a scythe.

The following notice appeared in The West Australian newspaper of Tuesday, 27 July 1920: “Mr. Samuel Isaacs, a 74 year old resident of the Margaret River, passed away on the roadside midway between Busselton and Karridale, on Thursday morning July 15. Mr Isaacs, with a companion, left Busselton on Wednesday at about 3 pm and was thrown out of his sulky while in the act of lighting his pipe. At the time of the fall, which left practically no mark on him, he made light of the matter but later asked to be sat against a tree. In that position he continued for some time, appearing to rally, but as night appeared a change for the worse set in and a camp was made with a couple of travelling friends.

“Gradually his condition became worse, and death occurred, at about 6 a.m. "Old Sam Isaacs," as he was familiarly termed, was born at Karridale, and, like many of the older generation of Western Australians, was particularly hardy and active. Even at the advanced age of 74, he had all the industry of a youth. He was a splendid teamster in the thickest forest, an expert bullock driver, a good bushman, and a kindly and trustworthy settler.” Further information from Ted Ashton indicates that the accident happened on Metricup Hill and Sam was traveling with Charlie Simpson, whose daughter Mary was married to Sam’s son Fred. Ted Ashton's father Albert and Fred went looking for them and took them straight into Busselton after they found them.

Fred Isaacs, one of Sam and Lucy's children. Worked as a bullock driver for Edie Bussell and married Mary Simpson. They had six children Maurice (Peck), Elsie, Peter, Robert, Bill and Kath. Later he was employed to cart river water to the 100-gallon tank that provided water for the hospital. He was employed by the Road Board as a traffic and cart licence inspector. These licenses cost 1/9 pence and Bill Duggan remembered that "farmers used to drive their horses and carts into town and park on our place, which was private property, so they wouldn't get caught by Fred.”

The Road Board also gave Fred responsibility for the cemetery Gloucester Park and the dog pound, a job he kept till the end of 1953. The family lived on Townlot 28, bounded by Wallcliffe Road, Mitchell Street and the railway reserve. The land was subdivided in 1952 into four half-acre blocks and one five-acre block and rated to Peck Isaacs. Peck worked for Ernest Le Souef on his property, Glen Ellie, before being employed at the butter factory as truck driver collecting milk from farms.