The timber industry in the south-west of Western Australia is inseparable from the names of M.C.Davies and of Karridale.

Early timber operations in the area had laboured sorely under the difficulties of bush transportation and ship-loading. Willie Eldridge fought hard, but was unable to overcome these problems as his bullock teams stoically hauled their loads to jetty-less Hamelin bay.. The timber jinkers had to be walked into the ocean until the water was up to shoulder level of the bullocks and the platform of the jinker was level with the water surface. The bullock team was then turned until the jinker was parallel with the beach and the timber could then be unloaded on to the lighters. It is hardly surprising that Eldridge lost two workers, drowned in an operation like this in 1876. Another ship foundered and one successful export cargo found itself in south Australia in the middle of a timber glut there and was unable to cover its costs. A debt-ridden and frustrated Willie Eldridge was unable to realise his ambition of establishing a viable timber export business.

M.C.Davies was made of other stuff. Born in London in 1835, he came to Tasmania with his family in 1840 and in 1851 moved to Victoria where activity in the goldfields apparently yielded the capital to establish him as a contractor in Adelaide supplying building materials on a commission basis.

Davies came to Western Australia in 1875 to gain a first-hand knowledge of the timber industry and stayed to imprint himself forever on the history of the industry and the area. His large family comprised five daughters and seven sons, all of the latter to be actively involved in the family business.

Davies’ business acumen was apparent in the methodical way in which he went about learning the industry. He bought shares in the “Rockingham Jarrah Timber Company” and studied its operation. He quickly concluded that there was a prime need for expert financial structure, mills situated near harbours and railways to transport the timber from its source – with iron rails, not wooden, to bear the wear and tear.

Davies applied for the lapsed Eldridge lease in 1878 and built his first mill at Coodardup in 1881, having shipped over 8000 tons of timber in the meantime. Extensive railway lines and a jetty at Hamelin Bay and Flinders Bay, the dismantling and removal of the Coodardup Mill and its transport (by rail) to the new mill site at Karridale heralded the establishment of a township of rare complexity – and success.

Workers’ houses were provided free, wages were stable and paid on an incentive basis, fresh food was readily and cheaply available at the Mill Shop, schooling was provided and there were many recreational pursuits, including a sports ground and a race course. Promissory notes issued under M.C.Davies’ name were so well regarded that they could be converted to currency throughout the colony. The Davies family houses were palatial in concept and much entertaining was done, including the celebrations surrounding the opening of the Leeuwin Lighthouse in 1896 (the lighthouse having been built by another M.C.Davies company) where Sir John Forrest was entertained, and visits by guests of similar calibre were not at all uncommon.

The business boomed and it is estimated that by 1900 the population of Karridale would have been in the vicinity of 1000 people. Over the following years strategic amalgamations of timber companies took place and the industry in general felled without cease, but this hunger for timber had decimated the forests and what remained was suddenly no longer viable. The mill at Karridale had closed early in the century and the Boranup Mill closed in 1910.

M.C.Davies died in Perth in 1913. The township of Karridale was reduced to ashes by the huge bushfires of 1961. 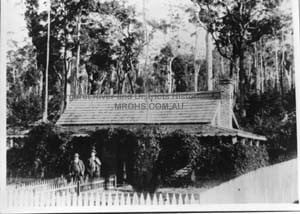 Karridale workman’s house, thought to have been the cottage opposite the mill, 1890s. 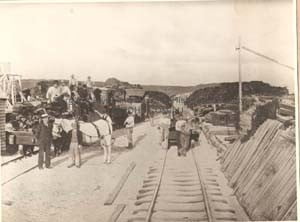 Timber yard on Hamelin Harbour in the time of M.C.Davies 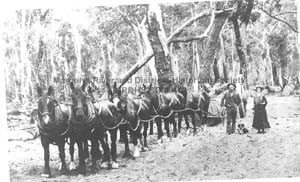 Logging whim on the north bank of the Margaret River, 1905/6. 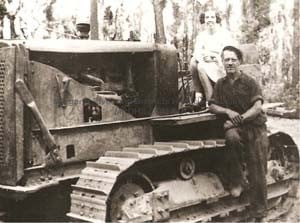