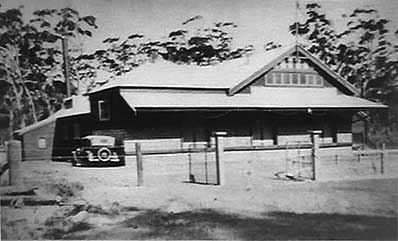 This building was built in 1929 by Wesfarmers and in 1933 it was purchased by a local co-operative in South West Co-operative Dairy Farmers Ltd and was known as "Sunny West Co-Operative Dairies". It was firstly a butter making factory servicing the many dairy farmers in the district. In 1952 it was converted to a cheese making operation until it's closure in 1977. By then the milk handling had become bulk and some farmers converted to whole milk production. The first manager was Howad Coate (1930 to 1952), then Henry Pearman (1952 to 1975) and H.K. Smith (1975 to the closure in 1977).

In 1982 the building was purchased by Phil Hogg and John Zar who established the towns first vegetable/fruit market. This continued for a number of years with various owners including John and Carmel Zar, Kevin Fox, Theo Matthews, Anne and Ian Griffiths, Greg Morrell and Paul Smith until 2012. Paul Iles and sister Bridget Rathbone set up the very popular Blue Ginger Fine Foods cafe. Also in this building are Garden Basket fruit and vegetable store and Margaret River Seafood, 34 Degrees Blue.